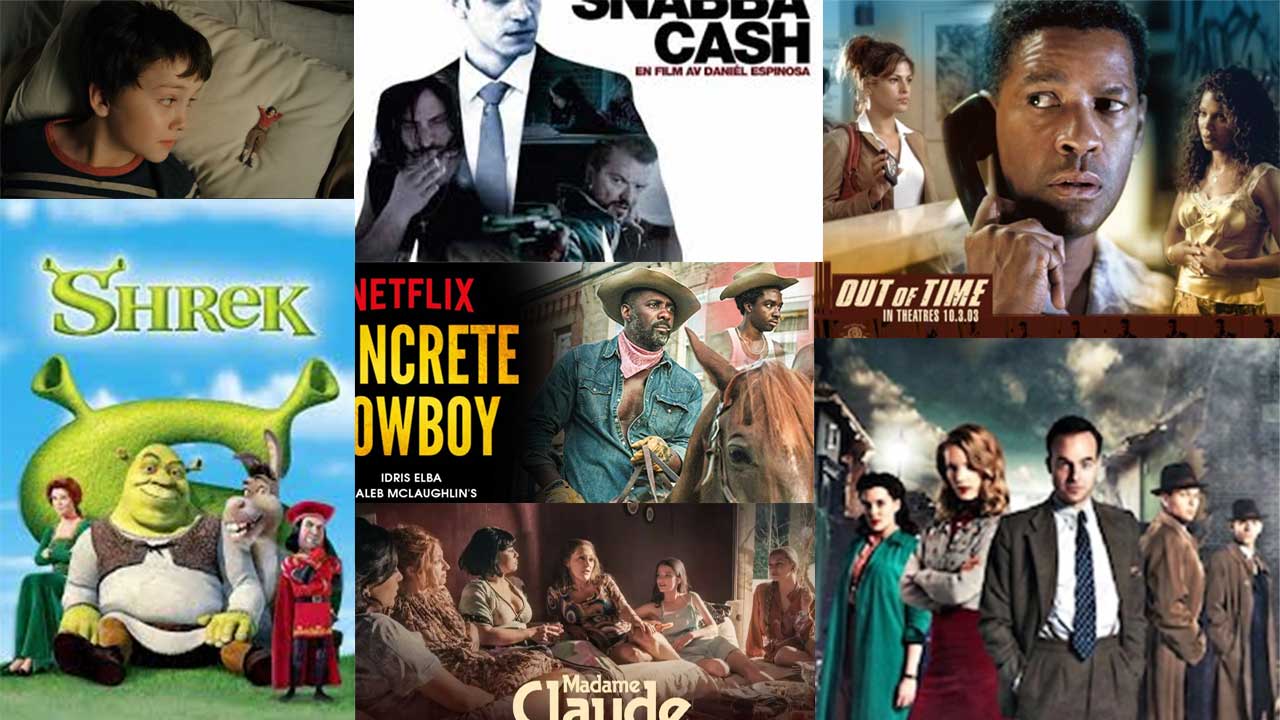 Beneath (2013) – Horror that pits a group of trapped high-school seniors against a giant man-eating fish.

Cast Away (2000) – Drama starring Tom Hanks as Chuck Noland, a FedEx executive that is left stranded on a deserted island after surviving a plane crash.

Collateral (2004) – Crime-thriller about a cab driver held hostage as his assassin customer carries out of his contracts in LA, in one night.

Death Becomes Her (1992) – Horror-comedy from Back to the Future director Robert Zemeckis.

In the Name of the Father (1993) – Daniel Day-Lewis and Emma Thompson star in this biopic of the man wrongfully sentenced for an I.R.A. bombing.

Masterpiece: Worricker: Turks and Caicos (2014) – Bill Nighy returns as Worricker, a British Spy forced out of retirement when his past catches up with him.

Outcast (2014) – Nicholas Cage action-adventure where he plays a warrior on a quest for vengeance.

Out of Time (2003) – A Police Chief is left in hot water when money from a drug raid is stolen, and his mistress is found dead. It’s a race against time to prove his innocence before the FBI can catch him.

Shrek (2001) – To free his home refugee fairy tale creatures, the ogre Shrek is sent on a quest with a talking Donkey to free the beautiful Princess Fiona from a dragon-guarded castle.

Shrek 2 (2004) – In celebration of their marriage, Shrek and Fiona are invited to the kingdom of Far Far Away, where Fiona’s parents reign. But upon arriving the newlyweds aren’t as welcome as they’d hoped.

Shrek the Musical (2013) – DreamWork’s beloved animated comedy was brought to life on stage, featuring an incredible run on Broadway and The West End.

They Live (1988) – Cult classic starring Roddy Piper as Nada, the lone wanderer with a special pair of sunglasses that allows him to see the world for what it truly is, dominated by mind-controlling aliens.

The Time Traveller’s Wife (2009) – A husband’s marriage is put to the test when his involuntary power to time travel gets too much for his wife.

Just Say Yes (2021) N – Dutch comedy featuring Yolanthe Cabau as Lotte, a woman whose life is upended after years of planning her wedding only for the groom to cancel last minute.

Coded Bias (2020) – In-depth documentary based on the research of MIT Media Lab researcher Joy Buolamwini, which lead to the discovery that current facial recognition technology does not accurately detect darker-skinned faces.

Family Reunion (Part 3) N – When the McKellan family moves from Seattle to Georgia, they struggle to adapt to life in the South.

The Big Day (Collection 2) N – Next set of episodes of the Indian reality series.

This is a Robbery: The World’s Biggest Art Heist (Limited Series) N – Docu-series on a heist that occurred in the 1990s.

The Way of the House Husband (Season 1) N – Japanese anime series that sees the legendary Yakuza ‘Immortal Tatsu’ retire from gang-life, and settle down as a house husband.

Night in Paradise (2021) N – Former South Korean mobster Tae-Soo flees for his life after the death of his sister and nephew. Arriving on Jeju Island, Tae-Soo meets Jae-Yoon, a terminally ill woman who has given up on life.

A Star Is Born (2018) – Lady Gaga and Bradley Cooper headline this musical romance.

Dad Stop Embarrassing Me (Season 1) N – Sitcom starring Jamie Foxx as a single father and successful cosmetics brand owner gets a crash course in fatherhood when his teenage daughter movies in with him.

Shadow and Bone (1 Season) N – Based on the best-selling Grishaverse novels by Leigh Bardugo, the fantasy-drama takes place in a world ravaged by war, where the threat of the Shadow Fold threatens to destroy everything. When Alina Starkov’s magical powers are revealed to the world, she is sent to train and hone her magical abilities as Grisha, an elite army of magical soldiers.

The Innocent (Limited Series) N – Spanish crime-drama that centers around Mateo, the man who became an accidental murderer after interceding in a fight nine years ago.