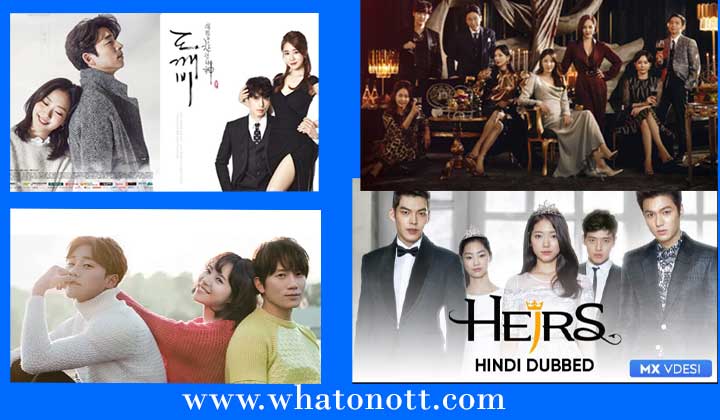 Here is the latest updated list of K-Dramas Web series available to watch on Mx player. Korean drama web series craze increases day by day all over the world.

The story of the series revolves around As a child, Park Hoon (Lee Jong-suk) and his father were kidnapped by North Korea. In North Korea, Park Hoon was trained to become a doctor by his father who was already a famous doctor. Park Hoon became a genius thoracic surgeon. He deeply fell in love with Jae Hee (Jin Se-yeon) in his high school.

In his quest for a bride to break his immortal curse, Dokkaebi, a 939-year-old guardian of souls, meets a grim reaper and a sprightly student with a tragic past.

The story of a woman who strives to achieve her goal of entering high society by becoming the “queen” in the 100th floor penthouse in Gangnam, the pinnacle of success in her eyes.

The interesting story of Kill Me Heal Me is about a man, Cha Do Hyun who is a third-generation business heir and he has dissociative identity disorder. The human body is capable of all sorts of things to survive a difficult situation so when cha Do Hyun suffers several life-threatening traumatic events, he develops an illness.

After a chance encounter in LA, two teens from different social backgrounds reunite at an exclusive high school attended by Korea’s über rich.

A man suffering from prosopagnosia meets a woman who is unforgettable.
Lee Yoo Chan is the founder and CEO of the IT company “Next In”, which has become the most desirable places to work. He suffers from prosopagnosia, a condition where he can’t recognize faces, and this makes him very guarded and mistrustful of most people.

I’m Not a Robot is a Korean language romantic-comedy series set on a science fiction premise. Kim Min-kyu is a rich businessman and the largest stakeholder in the KM Financial Company. However, having everything that one can dream of is not enough. Kim Min-kyun suffers from a rare disease and a set of allergies that are triggered by human contact.

In a refreshing take on the genre, “Doctor John” will portray the doctors’ search for the cause of their patients’ mysterious pain as a thrilling chase, almost like a detective hunting down the perpetrator behind an unsolved crime.

A dirt-born character chooses to join politics over getting a job and punishing rogue politicians with an elite official.